I spent a sunny September morning documenting the Great White Ash, a native ash tree nestled away in a green bank side on the far side of the Tor.

She is one of the most spectacular trees in the area, her vast trunk shines silvery white with age and her long limbs undulate like immense dragons reaching all the way to the ground, then climbing back towards the light. Some branches reach up to 20 metres from the main trunk, touched and partially buried by the bank side then climbing again to form what could almost be counted as new ash trees.

Those who know this tree will be aware of her precarious placement on a steep embankment bank beside a small coombe on the far side of the Tor. The white appearance of her trunk is consistent with only a few other ash trees in the area, particularly on that far side of the tor. Not all old ash trees appear to adorn this dusty white colouring and I am yet to put my finger on why that is.

How long The Great White Ash will remain standing is a subject of debate, all around the base are large bracket fungi and broken areas of bark revealing holes. Knocking on the wood reveals that the exposed side of the tree is degrading. I have seen many ash trees with degrading heartwood, it doesn’t mean death for the tree, some seem to fund their new growth in this way, sending roots sent down into the rotting trunk and many ancient ash trees have no centre at all.

Despite the condition of her trunk, she remains one of a few untouched ash trees in the area, others being mercilessly slain to stumps or pollarded where they stand and left to regrow new canopies. She has lost some large limbs on her exposed side, possibly as a result of instability caused by the degrading trunk, a trail of sun bleached logs remain tumbling down the steep embankment at her feet. A recent branch fall took out a mature ash tree below her, possibly her offspring. The branches on the banked side seem healthy; they extend to meet the hillside, propping up the tree on that side.

The Great White Ash of Avalon appears to me as a grand cathedral, an imposing white pillar rising out of rolling green slopes; she has been through the wars, sacrificed large branches and becomes more exposed by the year, but she remains standing. She is a glistening treasure of Avalon, I am in awe of her presence and purity and the persistence of ash as a species. 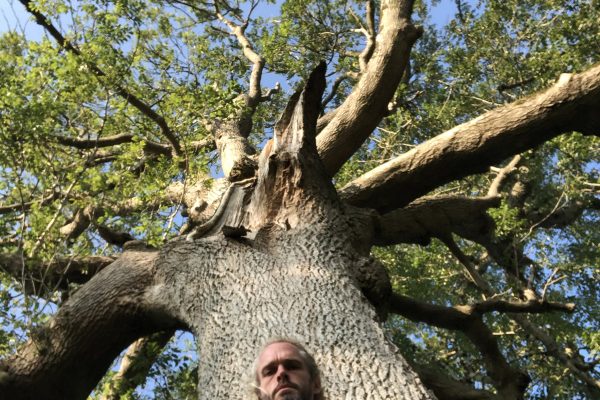 BUY ME A COFFEE!

I love producing art, music and words for others to enjoy. So that I can continue provide this valuable public service, please consider making a small donation, or buying me a coffee here:

Bring the outside in!

Sign up for Matt’s bi-weekly email and podcast featuring highlights from his private walks around Avalon. You will receive all content directly to your inbox, emails will be sent on the New Moon and Full Moon.

Trees of Glastonbury – The Ancient Rows

Trees of Glastonbury – The Grail Ash

Trees of Glastonbury #2 – The Outcrop of Hawthorn, Elder and their Friends

Recieve To The Trees content, delivered monthly straight to your inbox.